2009 has been a busy year with many adventures, ups and downs, new aquaintances... cannot believe it's already been a year. 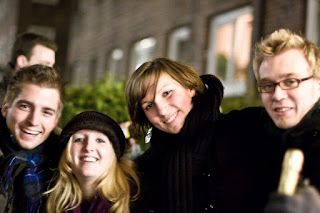 After recovering from New Year's, uni routine caught up quite quickly... as a freshly reborn Naumann stipendiary, I organised two seminars for the foundation: one on social networking sites and another one on the populist left wing party "Die Linke". Apart from studying and working, there has been plenty of room for pleasure: I went to the Oasis concert in Hamburg and also took some days off to visit the Berlin Film Festival "Berlinale". In February and March, my sister Nina moved in with me because she was interning at the photo mag Stern VIEW.

April, May and June

The second quarter of 2009 started with becoming film makers. With 3 of my classmates I managed to write a screenplay, cast actors, shoot the film and edit it within 5 days. Let me know, if you are interested in watching "Abschied nehmen" and I will send you a link. 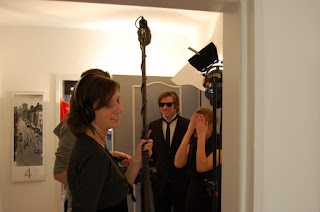 During the shooting
After the stressful film production I took a week off and went to visit my friend Gabi in Granada. After two trimesters of studying together, I had to say goodbye to my dearest classmate Mia, who was an exchange student from Copenhagen. She has become one of my closest friends in Hamburg and I already knew back then how much I was going to miss her. Turning 25, I decided to celebrate my birthday in Hamburg for the first time. With the help of my friends and classmates, I managed to bake glutenfree pizza for everyone and even organised a huge TV to show the local football derby between Hamburg and Bremen. 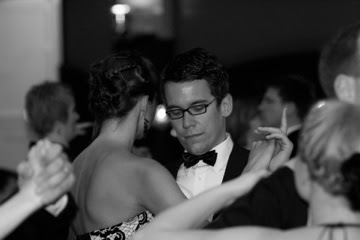 In May, I went to the traditional Naumann Spring Ball, my first Naumann event being a stipendiary again. This years location: Magdeburg. Except for the pretty cliché gay bar "Gummibärchen" the city was not as ugly as I expected, the venue was beautiful and the weather was pretty nice... With the great support of two fellow Naumann stipendiaries Doro and Astrid, I organised another panel discussion for the Naumann foundation on developmental politics. We introduced our successful deveopmental project "Lebenschancen Malawi" to the audience and discussed the ups and downs of developmental aid. 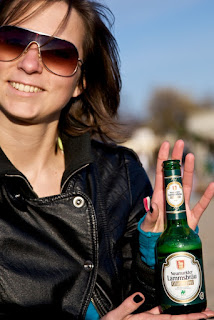 glutenfree beer and meat = perfect barbecue at the river Elbe

In June, summer arrived and we were only little motivated to study. Instead, we organised some spontaneous barbecue sessions on Elbe beach or in the Stadtpark. I attended my first Alumni Summit and got to know a lot of nice Alumni from my 5-year-old uni. I also volunteered to organise "Thank God it's Friday" - a monthly meeting at which an Alumnus tells the students about his or her job and how he or she got there.

Summer in London. I spent three months in London interning at the Digital Department of Random House UK. I helped monetising a pub community called the good pub guide and learnt a lot about online and mobile marketing. Two of my DC friends, Anis and Diana, happened to be in London at the same time so we had a little reunion. Apart from that I made a lot of new friends among my colleagues, classmates and facebook. 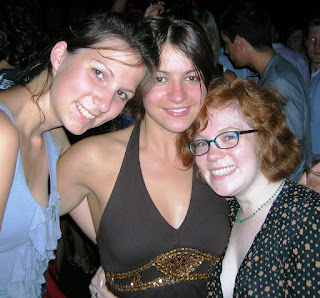 celebrating Katharina's birthday with my flatmates K and Ash
The size of the city, the metropolitan atmosphere and the variety of different areas and ppl within London made me wish to stay longer than three months. During my stay, a lot of friends came to visit me and I could show them around and discover London with them. I went on a day-trip to Brighton, and spent a couple of days in Paris and Madrid - you get quite good deals from and to London airports. It has been four years since Germany's last national election and again I was in the UK trying to catch up with the news, polls and election campaigns. Together with my flatmate we followed the debates via livestream as if it was football. The only acceptable combination of parties won and I decided to fly back home at last...

After three months of working, I was quite anxious to go back to uni and study more. I was lucky because I was chosen for the only online project for this trimester.

Along with three classmates, I got the task to give an overview on the current online fundraising market and to develop a concept for social organisations to improve their profile on betterplace.org and hence make the most of their fundraising. The project has been quite challenging but also really great whenever we talked to organisations and realised how much they needed our help with digital and social media. Also, betterplace.org has been really helpful and provided us with any information we needed and a room to work within their office. So it actually felt like going to work. In the meantime, I moved to a new flat: I live in Winterhude now - quite posh, but I get finally used to it - and have the best flatmates and neighbours I could imagine. Even though uni eats up my life, Christoph and Söan ensure that I still have a social life and drag me to the Kiez and places like this. On the 23rd, I went home for Christmas and New Year's.

"Author's Note: The following is a work of fiction. Any resemblance to persons living or dead is purely coincidental. Especially you Jenny Beckman. Bitch."

How to make Viral Videos!